Suncor Energy posts 6.5% Increase in Production for Q1 2011; Capital Spending was primarily on Expansion of In Situ Oil Sands Operations; Production In Line with company’s target of one million boepd by 2020

Suncor Energy’s upstream production in first quarter 2011 was 601,300 boepd, up 6.5% over same period last year. Suncor’s Q1 2011 production averaged 601,300 boepd, compared to 564,600 boepd during the first quarter of 2010.  Oil sands production was 322,100 boepd, 59% increase from the first quarter of 2010. Suncor, which is expanding its oil sands production and processing operations as part of a joint venture with Total, said it had seen higher oil sands production volumes and higher realized prices in upstream operations.
In March 2011, the company completed sale of non-core North Sea assets for proceeds of £105 million (US$ 170.44 million), subject to closing adjustments. The company secured two operated exploration licenses and one non-operated exploration license in the Norway portion of the North Sea in April 2011. In addition, the company is evaluating an exploratory well in the Ballicatters field offshore East Coast Canada.


Targeting One Million Boepd by 2020

Suncor continues to move forward on its ten-year growth strategy outlined in December 2010. In support of the growth strategy, capital spending in the first quarter was primarily focused on expansion of the company's in situ oil sands operations. In April 2011, Suncor began injecting steam into a Stage 3 well pad and expects to achieve first oil by early July 2011. The expansion is expected to be fully operational in the third quarter of 2011, with production volumes ramping up over approximately 24 months thereafter toward target capacity of 62,500 boepd of bitumen. 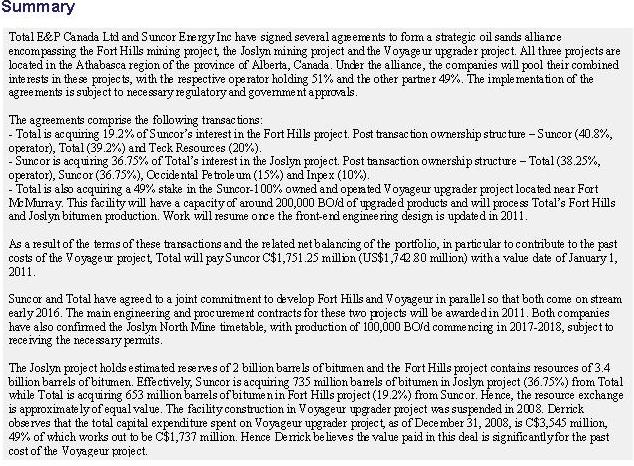