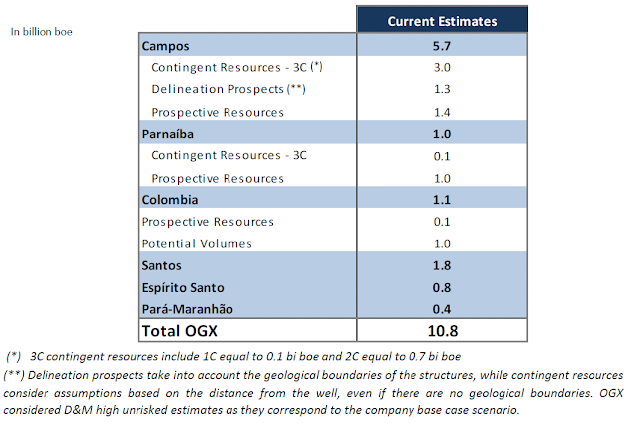 OGX, the Brazilian oil and gas company responsible for the largest private-sector exploratory campaign in Brazil, today disclosed the results of the reports prepared by petroleum consultants DeGolyer & MacNaughton ("D&M"), which estimate new volume of resources held by the Company in Brazil's Campos and Parnaiba basins and three basins in Colombia. These reports indicate net potential resources for OGX of 5.7 billion barrels of oil equivalent ("boe") in the Campos Basin, 1.0 billion boe in the Parnaíba Basin and 1.1 billion boe in Colombia. When combined with the estimates from the previous report for the Santos, Espírito Santo and Pará-Maranhão Basins (Sep/09), these new results present a total volume of net potential resources of 10.8 billion boe. 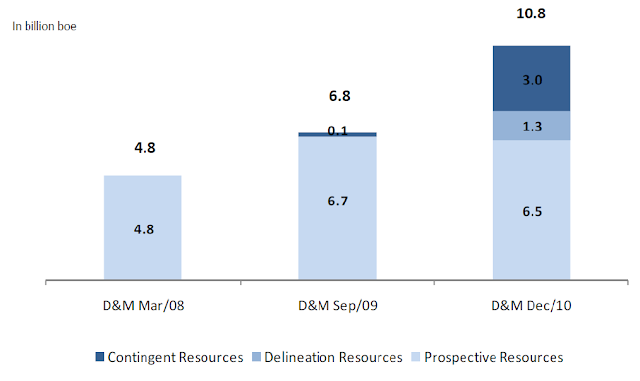 The report by oil-field auditors DeGolyer and MacNaughton released on Friday showed a nearly 60 percent jump in the company's potential oil resources, but the Deutsche researchers noted that the crude found in recent exploration activity carried a higher degree of risk.

Potential resources refer to estimates, often based on seismic and geological data, of the amount of oil in a given reservoir that could be recovered. The estimates are less certain than proven reserves.

Batista on Monday described the DeGolyer and MacNaughton report as overly conservative and insisted the company would demonstrate the reserves situation was in fact optimistic.

OGX is seeking $2 billion in financing to finance investments, Batista said, adding it could be through a bond issue or by receiving money upfront for future oil production. 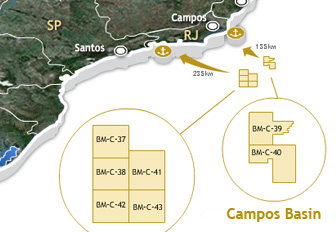 The company throughout 2009 reported repeated discoveries in the shallow water Campos Basin that helped push its stock up more than four-fold between the start of that year and the end of 2010. Its valuation has at times rivaled that of mid-sized oil companies with significant production profiles such as Spain's Repsol and  Devon.

Frank McGann, an oil analyst with Bank of America Merrill Lynch, said in a report that "though the 10.8 billion boe (barrels of oil equivalent) headline figure did not disappoint, a closer look at the underlying data suggests that this number is significantly overstated."

However BTG, along with analysts from other banks, said investors will likely remain interested in OGX's portfolio of shallow water offshore fields that are cheaper to produce than those in the deep-water region known as the subsalt that is dominated by state-oil company Petrobras.
Posted by Rupesh Govindan at 4:49 PM