Shell to spend $5 billion over 5 years on China shale gas. Unconventional gas fever spreads across US, Europe and now in China…

Shell aims to spend $1 billion a year on shale gas in China over the next five years if its exploration work currently underway proves to be a success. "It’s too early to say that shale gas is game changer in China but I have great expectations. We are drilling 17 wells this year in regions such as southwestern Sichuan province. That will give us a sense of magnitude of what's available here," said Shell chief executive, Peter Voser. China does not have any shale gas production yet, but has a rough target to pump some 10% of its total gas output from shale gas by 2020. "If we are successful, we are aiming to spend $1 billion a year over the next five years on shale gas," Voser said, adding that Shell was already spending $400 million on unconventional gas in China this year. 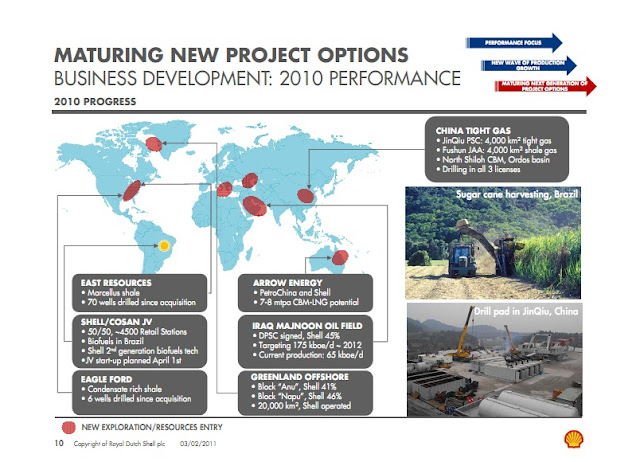 Chinese shale gas exploitation speeds up!!
China will start the bidding for eight shale gas blocks located in Guizhou, Chongqing, Anhui and Zhejiang in this year, and each block covers an area of 6,000-7,000 sq km, according to Zhang Dawei, deputy director of the Oil and Gas Resources Strategy Research Centre under the Ministry of Land and Resource (MOLR). According to MOLR’s Oil & Gas Research Centre, China is aiming to increase its shale gas reserves to 1 trillion cubic metres by 2020. The government is also expected to introduce new policies to encourage shale gas exploration, including the reduction or exemption of royalties and import tariffs and value added tax for the import of key equipment needed for shale gas exploration, according to Zhang.
Zhang has revealed that more companies, such as Sinochem Group, Xinjiang Guanghui Group and Zhenhua Oil Co Ltd, that have experiences in overseas petroleum and gas exploration are added in the bidders list. The participation of these private companies will break up the monopoly of state-owned enterprises like PetroChina, Sinopec, CNPC and Shaanxi Yanchang Petroleum in this market.


Shell’s presence in China is marked by these transactions

Just a year ago, Shell and CNPC signed a 30-year deal to develop another tight gas block Jinqiu in Sichuan province. Shell recently started drilling two shale gas exploration wells in Fushun Block in Sichuan province. ConocoPhillips will soon finalise terms with PetroChina for a shale gas production sharing contract for a block close to Statoil’s acreage. Also, Sinopec is in talks with BP and Chevron about potential co-operation. Not only the local private companies are interested in exploiting these Chinese shales, but also industry majors like ConocoPhillips, Statoil, etc.,
Posted by Anitha Bharathi at 6:10 PM