Greenland – A frontier “giant” yet to be awakened!

Greenland is one of the few frontier regions left in the world where there are still large unexplored areas with giant structures and documented prospects. The latest hunt began in July, when the drillship West Navion spudded a well for Statoil and three partners about 145 kilometers offshore of Greenland's capital, Nuuk. The Qulleq-1, a name derived from the Greenlandic word for "oil lamp," marks the first drilling in the region since the 1970s.

Detailed geochemical studies undertaken by the Geological Survey of Denmark and Greenland (GEUS) have recognised five distinct oil types. The most significant of these is the “Itilli” type, which originates from a marine (Type II) oil prone Cenomanian-Turonian source rock.
These findings, in combination with the interpretation of an extensive modern seismic grid have revealed all the required ingredients for a potential “World Class” petroleum basin. As a result there has been significant renewed industry interest in the petroleum prospectivity of offshore West Greenland.
Cairn Energy currently has an interest in 11 areas (blocks) offshore Greenland, covering an area of approximately 81,000 sq km. Cairn has operated interests offshore Greenland at Sigguk, Eqqua, Lady Franklin, Atammik, Sallit, Kingittoq, Saqqamiut, and Uummannarsuaq. 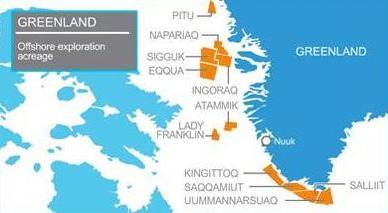 In July 2010, Cairn in July commenced drilling operations on the Alpha prospect (Alpha-1) and T8 exploration prospects in the Sigguk Block, approximately 108 miles (175 km) offshore Disko Island, west Greenland. The  well discovered oil in it. Cairn's West Disko program includes two Sigguk exploration wells and the acquisition of around 2,000 kilometers (1,242 miles) of 2D seismic in Eqqua.
As per an article in the Business Day, Cairn will spend more than $1 billion over the next three years drilling up to 10 wells off Greenland.
Other producers with exploration interests offshore Greenland include Husky Energy, which recently has been interpreting seismic data from its three Greenland exploration licenses.
PA Resources AB on July 15 2010 completed a seismic survey of Block 8 offshore West Greenland. The seismic survey, initiated on June 6, was completed 10 days ahead of schedule. Data processing is now underway.
ExxonMobil and Chevron also hold rights off Greenland and are interpreting their own seismic data to identify potential drilling locations. ''Any exploration drilling campaign is unlikely before 2014,'' said Chevron, which holds 29 per cent equity in Block 4 off western Greenland with the operator Dong Energy.

Scott Kerr, the chief executive at the Norwegian Energy Company, said: ''We believe that with the estimated size of resources in Greenland it would be economic to develop at over $US75-a-barrel oil prices, but this depends on the reservoir quality, the field's size, and distance from shore. There are big differences in the size of resources because little exploration has been done.''
The energy consultancy IHS Cera estimates that technically recoverable undiscovered resources in Greenland could be equivalent to 50 billion barrels of oil.
Challenges….
The basic challenges that Greenland is currently facing at its oil and gas exploration front are the high costs necessary to pay for infrastructure, icy winter conditions which limit the time window for drilling operations and also opposition from different environmentalist groups.


What next?
Amid all these challenges and controversies, Greenlanders believe that an increase in its oil and gas exploration and production efforts will establish political independence from Denmark. If Greenland is successful in generating income from its mineral resources it will decrease its reliance on £500 million ($819 million) a year in subsidies from Denmark by 50 percent.

Posted by Sanjay Samuel at 2:33 PM