ConocoPhillips to shed $5- $10 billion worth assets in UK and North America......Who are the probable buyers???

ConocoPhillips plans to sell an additional $5 billion to $10 billion in non-core assets over the next two years, the proceeds to fund its share buyback and capital expenditure programs. 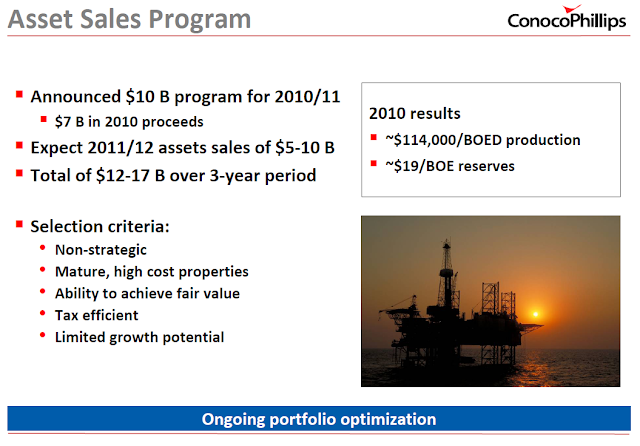 Chief Executive Jim Mulva told analysts the company plans to sell a total of $12 billion to $17 billion in assets in a three-year period, including at least $1 billion in refining and marketing properties this year. The dispositions include non-strategic assets in the North Sea and additional mature assets in the U.S. and Canada. The plan also includes a 15% stake in the Australia-Pacific liquefied natural gas project it agreed to sell last month to Sinopec.

Mulva told analysts that the additional asset sale target is expected to come on top of the $7 billion the company already sold in assets last year and excludes the $8.3 billion from the sale of its 20% stake in Russian oil giant Lukoil. 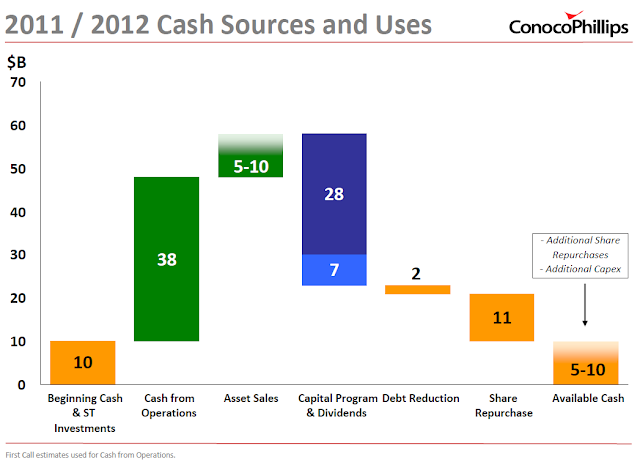 Conoco is in the midst of a restructuring plan started in 2010 to shore up its finances by selling assets. It initially didn't plan to sell refining properties until, aiming to avoid selling assets at deep discounts, but in October it said it would ramp up its sale of assets in 2011 amid a rebound in the industry.

The asset sales mark a shift from Conoco's debt-fueled acquisition spree when commodity prices were soaring. It also underscores the company's confidence that its "shrink-to-grow" strategy is yielding positive results among investors.

Impact of asset sale on production 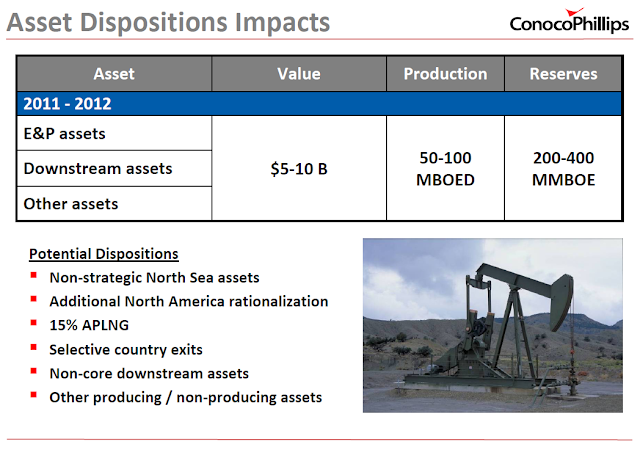 ConocoPhillips expects its oil-and-gas production to be between 1.6 million and 1.7 million barrels of oil equivalent per day in 2013, down from 1.75 million barrels of oil equivalent per day it produced last year due to the impact of the asset sale program. However it expects output to grow 2% to 3% per year in the long term, driven mainly by the startup of projects in Asia, the North Sea and the U.S.

Proceed to be diverted to Capital Expenditure program 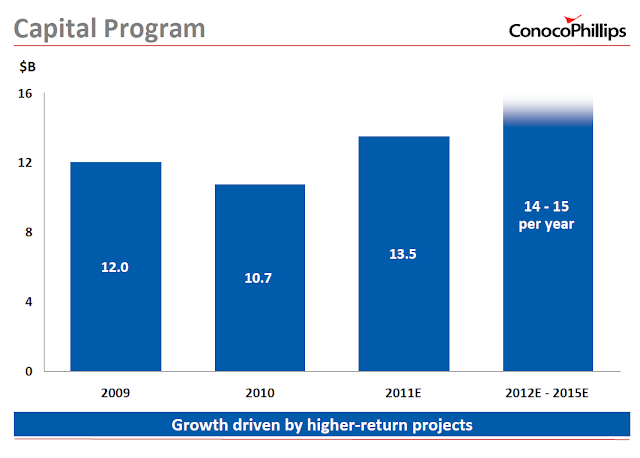 The company expects to use proceeds from the asset sales announced Wednesday to fund a $10 billion share repurchase program it had previously unveiled, and for capital investment. In a slide presentation, the company said it expects share buybacks to total $11 billion through 2012.

Conoco plans $13.5 billion of capital spending this year, with the vast majority targeted for exploration and development. It said it plans to invest $14 billion to $15 billion per year from 2012 to 2015.

Conoco said it plans to invest 50% more this year in projects in North America mainly aimed at increasing drilling activity in oil-rich shale areas such as the Eagle Ford in Texas and the Bakken Shale in North Dakota.
Conoco will not make any large-scale acquisitions,it will expand its presence in some areas such as the deepwater of the Gulf of Mexico through small scale deals.

The company said it plans to invest $1.4 billion in the APLNG project, which will be sanctioned by mid-year and have its first liquid natural gas delivery in 2015. Conoco is also planning to ramp up exploratory drilling in the Caspian Sea, with a new well planned for its Kazakhstan N Block offshore for late this year or early 2012. The company is also negotiating a production sharing agreement for Block 19 in Turkmenistan.
Posted by Rupesh Govindan at 12:09 PM