Marathon Oil Corporation has signed an agreement with Nexen under which Nexen will acquire a 40% working interest in 10 of Marathon's concessions in Poland's Paleozoic shale play. This partnership provides not only financial risk mitigation but combines the extensive unconventional drilling and completion experience of Marathon and Nexen to fully evaluate the potential of these concessions. 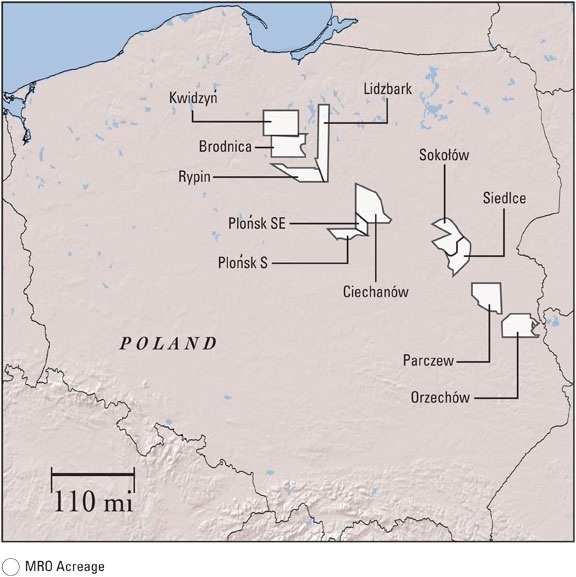 Source: Marathon Oil Website
Marathon currently holds an interest in 11 concessions in Poland, encompassing 2.3 million acres. The shales are Lower Paleozoic and located at depths of between 8,000 and 13,000 feet. Marathon plans to acquire 2D seismic during the first half of 2011, potentially followed by the drilling of one to two wells in the fourth quarter of 2011 and seven to eight wells during 2012. Marathon will remain operator of the 11 concessions.
Poland shale gas- A Game Changer??
Poland's Lower Paleozoic shale play may be the largest and most significant opportunity for unconventional gas in central Europe and is evolving rapidly in the wake of successful shale plays in North America. Natural gas demand in the large and growing European market is approximately 50 to 55 billion cubic feet per day, with imports from outside the European Union accounting for approximately 50% of total gas requirements. 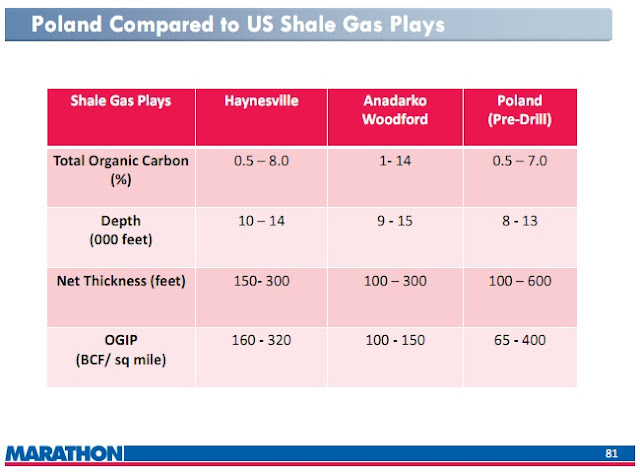 Source: Marathon - Howard Weil 2011 Energy Conference
In the last three years, Poland had issued more than 70 licenses for shale gas exploration which could make Europe less dependent on supplies from Africa and Russia. However, extraction of resources in Europe is more complex than in the US because of population density. Poland has 5.3 trillion cubic meters of shale natural gas, equal to more than 300 years of the country’s annual gas consumption, the Energy Information Administration of the U.S. Department of Energy said in a report. The companies are now drilling in Poland, but it will take at least a year to determine if shale gas production will be commercially feasible.
Lots more available on Poland table??
Poland’s shale resources are being targeted by Majors like ExxonMobil, Chevron, ENI, ConocoPhillips, Marathon, and Talisman as well as small independents like San Leon Energy, Realm Energy and BNK Petroleum. The following tables show the list of Poland shale gas deals.

Source: Derrick Petroleum E&P Transactions Database
As the companies' interest towards shale gas exploitation in Poland is heating up, few companies are calling for partners to give them a helping hand. Below is the list of Poland assets available for sale!!