With shale gas drilling going global, energy importing nations are evaluating their own geology, currently, to see if they have shale reserves that can be tapped.  Likewise, Argentina which imports natural gas from neighboring Bolivia is set to win the global shale race where other countries in Asia, Europe and Africa are gearing up aswell. What is considered as the “game-changer” for the US, will shale gas success be replicated outside North America ,or for that matter, in Argentina?

Currently, Europe is in the limelight for being ahead of the shale gas activities, however, one needs to watch out who might be the next one?
Whats  happening in Argentina?
Recent Shale Gas Transactions in Argentina 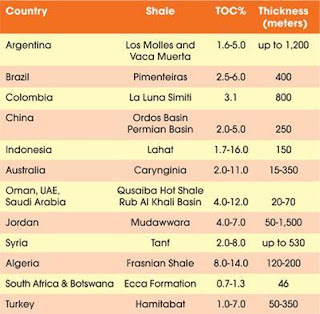 The Society of Petroleum Engineers estimates 2,116 tcf of shale gas in South America.

As per Hart Energy Global Shale Gas Study, shale gas is plentiful around the globe. Conservative estimates place the total resource volume at about 20,000 Tcf. This volume is likely to increase as more shale gas plays are identified and evaluated.

However , the uncertainty still remains wheather the operators would be able to overcome the hurdles of tapping this source of stored energy. The biggest challenges to developing these resources outside of the US include: