O&G players’ interest towards Niobrara is heating up!! Is Niobrara the next Bakken/Eagle Ford??

Here is the brief discussion about the emerging oil play in the US- The Niobrara Shale!!

The Niobrara shale formation is situated in northeastern Colorado and parts of adjacent Wyoming, Nebraska and Kansas. Samson Oil & Gas is one of the earliest companies to establish a position in the Niobrara. Other operators in Niobrara include EOG Resources, Anadarko, SM Energy, Noble Energy, Chesapeake, Whiting Petroleum, Quicksilver Resources, MDU Resources, and Bill Barrett. Chesapeake and EOG each have about 400,000 net acres in the Niobrara. 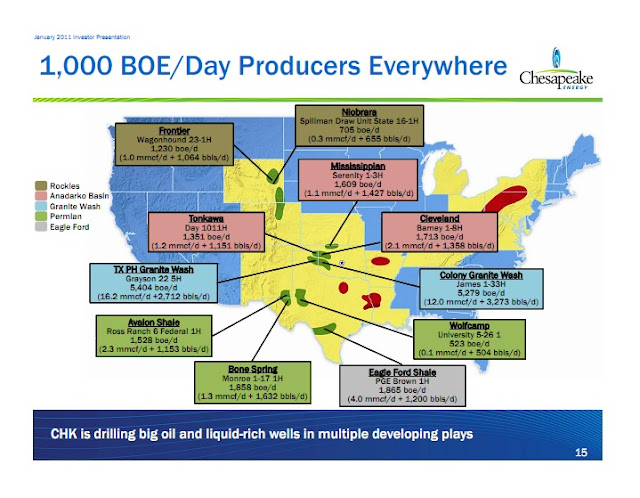 Source: Chesapeake Jan 2011- Investor Presentation
Niobrara operators’ 2011 drilling plan
The Niobrara Shale formation was well noticed in 2010 when EOG Resources reported a well here with production of 1,558 barrels of oil per day. With a large number of companies starting their initial exploration programs in the Niobrara shale in 2011, the shale play would witness a significant increase in drilling activities over the next few years.
The increased interest of the companies in the shale play is also evident from the recent lease sale rounds held by the Wyoming State Lands and Investments Board for area expected to be prospective for Niobrara shale. The overall investments in the state lease sale awards increased from an average of $3.2 million in 2008-2009 rounds to an average of $37.5 million in 2010 lease rounds.
In Wyoming, as per Wyoming Oil and Gas Commission, 202 horizontal well permits targeting Niobrara formation had been issued in the state as of November 24, 2010. In Colorado, during 2009-September 2010, there were 208 approved permits for Niobrara shale formation.
A look at the 2011 Niobrara deals captured by Derrick Petroleum

Why Niobrara Shale??
What makes the Niobrara Shale a prime target is that those companies with experience in the Bakken are looking to expand while companies that missed out on the Bakken Shale and have horizontal drilling expertise in natural gas shales look to take on positions in more profitable oil production.
At the end of 2010, the Japanese company ITOCHU made an entry into Niobrara Shale with an estimated investment of $390 million. This was followed by Chinese in Jan 2011 when CNOOC entered into a $1.3 billion Niobrara JV with Chesapeake. What a good start for Niobrara in 2011! This will be the driving force for the other operators who want to exploit oil plays.
Posted by Anitha Bharathi at 6:06 PM