Woodside reported production of 15.6 mboe for March 2011 quarter end, down 19% compared to the corresponding quarter due to tropical cyclone activity in the North West, the sale of Woodside’s interest in the Otway Gas Project in March 2010, planned outages at Vincent and NWS Oil and oil-field natural decline. However, this production fall was partially offset from increased volumes from the company’s Stybarrow fields. The company also announced it had abandoned plans to sell its Laminaria-Corallina assets, Darwin, after testing the market for a potential buyer.
The company projected its 2011 production between 63 to 66 MMboe – excluding its Pluto field, from which Woodside’s stake in production would be between 5 and 9 MMboe, the company said. Woodside has planned development, exploration and appraisal activities in Australia.
Development Activities:
Pluto LNG Foundation Project has transitioned to an operating site with the introduction of natural gas into the plant in early March 2011. Mitigation plans are in place to recover four weeks of weather related delays and retain our start-up target of August, with LNG one month later. 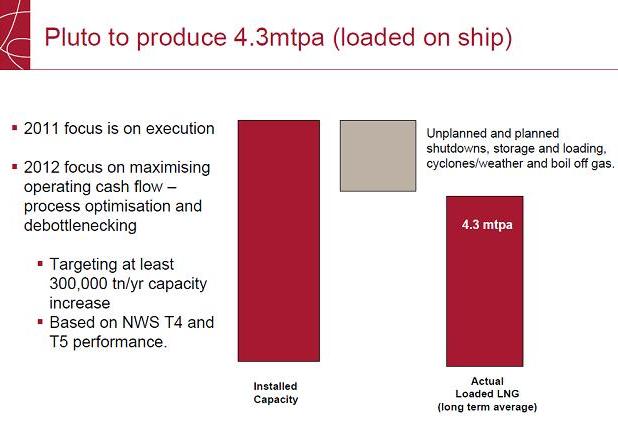 Pluto Expansion – progress continues with a gas discovery at Martin-1 in permit WA-404-P.
Browse LNG Project – Woodside’s Board approved Browse moving into FEED during the quarter, and has appointed FEED contractors who have now been mobilized.
Sunrise LNG – In accordance with international treaties, Woodside is continuing to advocate for the
approval of the proposed Floating LNG development with Australian and Timor-Leste governments.
NWS North Rankin Redevelopment Project – project remains on schedule and budget for 2013 completion.
NWS Oil Redevelopment Project – overall works are nearing completion with production shut-in on 7
March and resumption of production expected in late Q2 2011.
Exploration and Appraisal activities: