Shell acquires ~A$2 billion worth stake in Wheatstone LNG project from Chevron!

Chevron has signed agreements with Shell regarding the A$30 billion Wheatstone Project as a natural gas supplier and equity participant. Under the unitization agreement with Chevron's Australian subsidiaries, Shell will assume an 8% participating interest in the Wheatstone and Iago natural gas fields in the Chevron-operated permits WA-253-P, WA-17-R and WA-16-R, located offshore northwest Australia. The Wheatstone and Iago gas fields will supply Trains 1 and 2 of the Wheatstone Project, located onshore at Ashburton North in Western Australia. Shell will also assume a 6.4% participating interest in the project facilities, with Chevron remaining project operator with 73.6% stake. Financial terms weren’t disclosed. However, the media sources are estimating the value of the stake to be around A$2 billion. 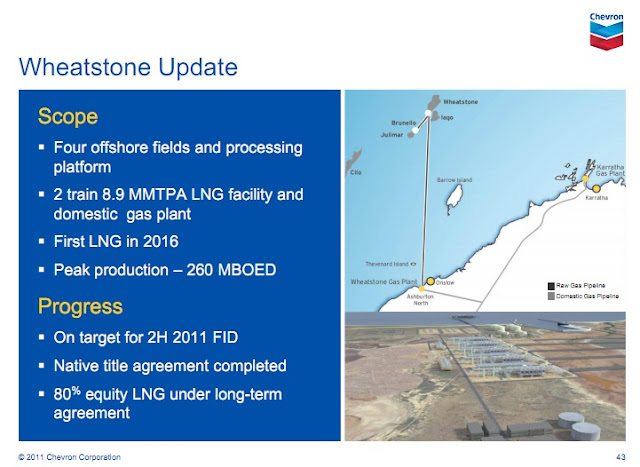 Source: Chevron Mar 2011 PPT
The front-end engineering and design activity on the Wheatstone Project is nearing completion. A final investment decision is expected in the second half of this year once environmental approvals and other associated agreements are finalized with various levels of government. The first phase of the Wheatstone Project consists of two LNG processing trains with a combined capacity of 8.9 MTPA and a domestic gas plant. The project is expected to come online in 2016.
Try this free document search tool
Asian customers for Wheatstone LNG!!
Apache and KUFPEC hold 13% and 7% stake, respectively, in the project. Chevron Australia managing director Roy Kryzwosinski said Chevron planned to divest more equity in Wheatstone to its foundation customers, including KOGAS and TEPCO, but its interest would never fall below 50%. Chevron is in negotiations with its Wheatstone customers TEPCO, KOGAS and Kyushu Electric, which are also set to take equity stakes in the project, said Chevron's spokeswoman. The three Asian LNG buyers have inked deals to lift 4.1 million mt/year, 1.5 million mt/year and 700,000 mt/year of Wheatstone LNG respectively. 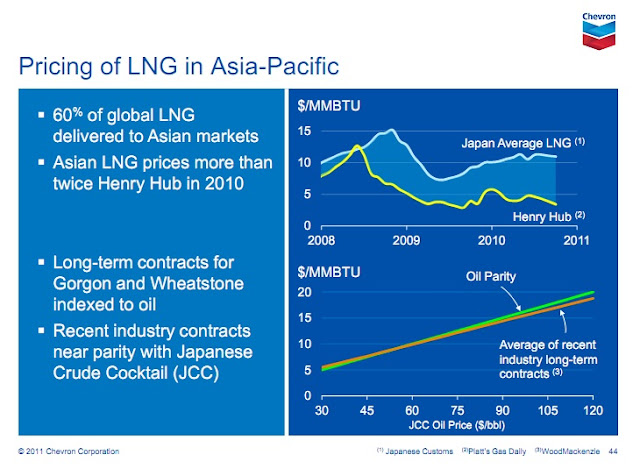 Asians hunger for LNG will continue!!
The Asian spot LNG prices settled at $11.6/MMBtu in the last week of March 2011. Approximately 60% of the global LNG is delivered to the Asian markets. The Wheatstone project notably has three Asian customers (nearly 80% equity LNG under contract). With the high LNG prices and strong Asian market conditions, the project is in a robust state!! In addition, Shell's entry into the project will speed up the project's development pace.
The following snapshot shows the LNG deals of 2010-