Abraxas Petroleum Built Around Solid Conventional Assets; Expanded Capital Program of $60 million for 2011; Most of its capex is going to producing more oil!!

Abraxas reported 2010 year-end reserves totaled 26.6 mmboe up 7% over 2009 despite selling 9% of proved reserves in our divesture program. The company operates wells in the Bakken, West Texas, South Texas, and Canada. Abraxas has outside operated wells in the Bakken. Most of its capex is going to producing more oil. Its goal this year 2011 is to try to get to a 50% oil/gas mix. In the Eagle Ford, it would like to accelerate its partnership with the JV. Last year it had asset sales of $34 million (non-core and non-operated). The money is used for this year's capex and to pay down debt. It would like to eventually get 90% of its assets operating. 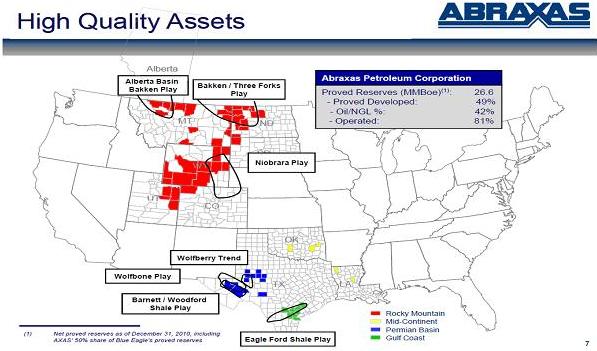 Abraxas has 8,333 acres in Eagle Ford. This location, part of a $25 million equity investment, is 43% oil, 35% gas/condensate, and 22% gas window. The company also has approximately 14,000 acres in the Niobrara shale, with 3,800 gross acres leased and 11 producing wells. Its holdings are in the same area with Chesapeake (CHK) and EOG Resources. In the Southern Alberta Bakken it has approximately 10,000 acres leased. Abraxas also has a small holding in the Pekisko Fairway in Canada.
Abraxas' Rocky Mountain assets has 7.2 MMBoe in proven reserves; 63% of this is proved developed, 82% is crude oil, with 1063 Boepd of production, 900 gross producing wells, and 90,362 gross acres. Primary locations here are the Willston Basin, Powder River Basin, Green River Basin, and Unita Basin.
The Permian Basin has 5.6 MMBoe of proved reserves; 66% proved developed; 70% is natural gas. There is also 1254 Boepd of production; 237 gross producing wells; 36,064 acres, The primary producing sub-basins are the Delaware Basin and Eastern Shelf.
Try this free document search tool
The Gulf Coast has 9 MMBoe of proved reserves; 38% is proved developed; 91% is natural gas; 1044 Boepd of production. This area has 74 gross producing wells, and Abraxas has 11,414 acres in the area. The primary sub-producing basin is the Onshore Gulf Coast.
This company looks to be another oil and gas exploration and production company with great assets that, in time, could turn into something great if everything works out. It is well positioned, especially if oil gets up to around a $100 a barrel and stays there for a while.
Posted by Kesav Gupta at 6:32 PM