Tullow Oil plc (Tullow) announced that it has signed a Sale and Purchase Agreements (SPAs) with CNOOC and Total in respect of the sale of a one third interest to each party of the interests Tullow holds in Exploration Areas 1, 2 and 3A in Uganda. Tullow will retain a one third interest. The terms of the transactions include a total cash consideration payable to Tullow of US$2.9 billion.
With the signing of these SPAs, a key condition of the Memorandum of Understanding (MoU) agreed between Tullow, the Government of Uganda (GoU) and the Uganda Revenue Authority (URA) on 15 March 2011, has been satisfied. The next step is for Tullow to make certain tax related payments to the GoU, on receipt of which all relevant consents become final and the other provisions of the MoU become effective.
Under the MoU, Tullow and its new Partners, CNOOC and Total, have been granted new licences over EA-1 and an onshore area of EA-3A and the partnership's rights to develop the Kingfisher discovery have been confirmed. A clear plan for the resolution of tax disputes on the various asset sales has been agreed by the GoU, the URA and Tullow.
Tullow and its Partners will now reactivate the significant programme of exploration and appraisal drilling and progress their development plans for the basin which they will jointly present to the Government of Uganda for approval 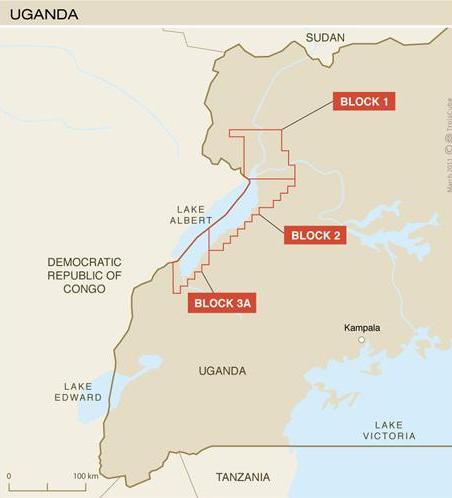